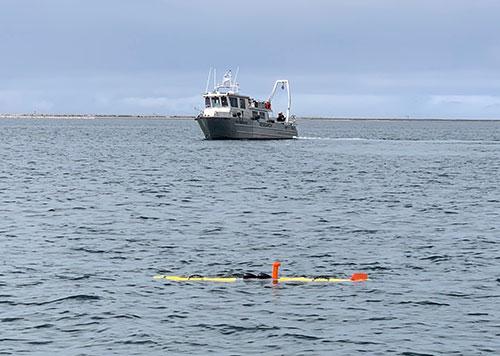 Strategic Robotic Systems (SRS) was pleased to be invited to participate in the inaugural L3 OceanServer User Conference held in San Diego, CA.  The user conference was established to share user success stories, Iver product development and third party integrations.  Throughout the first day were a number of informative presentations from Iver operators and the L3 OceanServer team.  SRS also presented about the use of FUSION as a reacquisition ROV with seemless data exchange between Iver and FUSION.

The second day of the conference L3 OceanServer organized on water demonstrations of their newest Iver 4.  There were two vessels provided by L3 OceanServer to split up the attendees.  SRS was onboard each vessel with a FUSION.  The initial demonstration saw the Iver travel near the surface and then dive performing impressive maneuvers.  While the Iver was below the surface and not visible the FUSION was placed in the water in station keep mode with sonar visually tracking the Iver.

With the Iver recovered to the vessel the FUSION / Iver interaction was demonstrated by easily adding the sonar mosaic collected by the Iver to the charting for FUSION.  The FUSION was then deployed and using the mosaic as a visual navigation tool the FUSION navigated to a sunken wreck where the sonar overlay was easily visible with the mosaic.  With the target acquired FUSION approached the wreck for closer inspection, demonstrating the ease of operation and stability of the system.

SRS greatly appreciated the ability to participate in the user conference and looks forward to interesting collaborations to maximize the use of both Iver and FUSION.