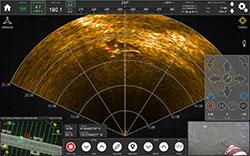 Strategic Robotic Systems (SRS) assisted in locating a missing person.  The missing person was reported to have drowned in close to 60 meters (200ft) of water with only approximate last known location available.  Statistically the average person in calm water will not drift more than 1 meter per meter of depth.  Using the approximate entrance to the water it was possible to create a radius to search.

FUSION’s user interface makes it simple to create a grid pattern based on a cental known coordinate.  A search pattern was designed to ensure complete coverage beyond the 60 meter radius using both forward looking multibeam sonar and sidescan sonar.  Visibility in the lake is poor at less than 3 meters (10ft).  Other obstacles were present including anchor lines for the floating bridge and construction debris.

The FUSION was deployed from a small vessel and initially sent to the coordinates of possible entrance to the water by the missing person.  A quick 360º sonar scan did not produce a target of interest.  The FUSION was then sent on a mission based on the preplanned search pattern.  While the FUSION was conducting the search pattern the real time sonar data was visible.  As targets of interest would appear they were marked and then acquired.  The first mission did not locate the missing person.

Based on more accurate information in regards to the site of the entrance to the water a second location was determined to be worth investigating.  The previously planned mission for the first location was moved to the new coordinates with a simple drag and drop.  Copying from the previous mission, the FUSION was deployed to the coordinates and a 360º sonar scan was conducted.  With no positive targets the FUSION was sent to the first waypoint of the mission and during transit a target appeared at 30 meters (98ft).  The target was marked and the "look at" function used.  As the FUSION approached the target it was very clear the missing person had been located at more than 25 meters (82ft).

The FUSION in control mode moved to within 0.5 meters of the target and held station.  A quick review of the environment using the "look at" and orbit function was conducted.  The persons arms were vertical in the water and the dual function grabber on the FUSION was rotated to match the angle.  FUSION was maneuvered in to grab the arm using small 0.2 meter steps in control mode until the grabber was around the wrist.  Once around the wrist the jaws were closed providing a secure grip.  With the FUSION securely holding the person, all automation was disabled so that it wouldn’t interfere with the recovery.  The FUSION, while holding the missing person, was pulled to the surface via the tether to the surface where the missing person was released from the FUSION so that recovery to the boat could take place.